A fun filled four hours working on this front wing of a Vauxhall Mokka. A crease that had hit through the swage line of the wing. A lot of different parts to this dent to contend with and the fact of it being silver.

So the customer called and once again this dent had been done in a car park after a shopping trip. People are so careless in car parks.

I explained to the customer that it wasn’t a nice dent and would take me roughly around 4-5 hours. The difficult part was rebuilding that swage line and getting all the metal flat again.

Overal I was really happy with the results as were the customers as well. 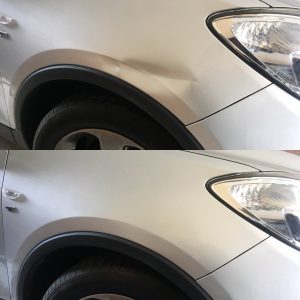 Please use our fix my dent page for a quote

A mobile business covering the island.